Join me in welcoming Tom Ruck to Highlighted Author. 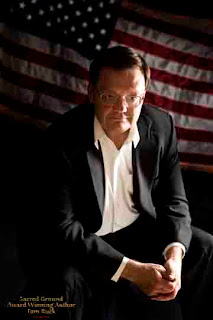 What better way to celebrate Memorial Day here on Highlighted Author than to have with usÂ Tom Ruck and his nationally awarded book, Sacred Ground, A Tribute to America’s Veterans.

Tom was gracious to send me his introduction and how Sacred Ground came to be as this is a very busy time for him.  This week alone, he’ll be speaking in Dallas and St. Louis before he heads to LA for more events. Thank you, Tom, for taking the time to be with us today.

Tom Ruck has served as Director of National Accounts for renowned corporations. He is a graduate of the University of Missouri in Columbia, grew up in the St. Louis area where he was active in many volunteer and philanthropic organizations. He now resides in Southern California, serves as a Visiting Fellow to the Freedom Alliance Foundation, is a member of the Pasadena Tournament of Roses and continues traveling the nation inspiring and honoring Veteran’s and their loved ones through his many speaking engagements.

How Sacred Ground came to be:

In the fall of 2004, Tom Ruck envisioned a book honoring the American Veteran. He realized he had to turn this concept into a reality; starting the process of creating and publishing this idea. An unknown author and photographer, the journey to publication was difficult, yet remarkable, and ultimately fulfilling, and is a story in itself. The result of Tom’s efforts, Sacred Ground, A Tribute to America’s Veterans, was released by Regnery Publishing achieving #5 ranking on Amazon. As he describes, I created this book as a labor of love to honor the truest of American heroes, our veterans.

In the stillness and solitude of the United States’ national cemeteries, the gratitude of a nation to its veterans is forever alive. This eternal gratitude is precisely what Tom Ruck portrays in his book, Sacred Ground, a coast-to-coast photographic journey through the national cemeteries, accompanied by poignant essays and quotations from historical figures and celebrities.

The inspiration for Sacred Ground came to Tom Ruck while he was in Los Angeles for a business trip in 2004. The idea was to create a book that would be a tribute to veterans, He jotted a few notes on a paper napkin and forgot about it until the next morning when he spotted the napkin as he was getting ready to leave for the airport.

He unfolded the napkin and reread his idea. For Ruck, who is neither a photographer nor a writer and had never served in the military, the concept was daunting. “I didn’t have a clue on what to do to get a book published,” Ruck says.

The easy thing would have been to crumple the napkin and toss it in the trash on the way out. Instead, Ruck stepped bravely into the world of nonfiction book publishing.

“This is something I have to do,” Ruck says, recalling his thoughts as he looked at the idea on the napkin. “I wanted to do something to say thank-you to the veterans. Ruck wanted to share with America and to make them aware of his strongest belief that America’s veterans are the truest of American heroes — “I believe in the American veteran and I am proud to have created this book that honors them and their dedication and commitment to our country.”

There are 131 national cemeteries in the United States, in which over three million Americans who wore the uniform of our country are laid to rest, Ruck says. The cemeteries are administered by the National Cemetery Administration, which is part of the Department of Veterans Affairs.

“They ( National Cemetery Administration) do an unbelievably fantastic job of keeping the serenity and the dignity and the beauty of those cemeteries alive forever to say a final thank-you to that man or woman who wore the uniform of our country,” Ruck says.

With the book concept in mind, Ruck dove headfirst into the project, looking for essayists, photographers, a publisher, and the official permission from the National Cemetery Administration.

Finding a publisher for the book was an arduous process, but once Ruck spoke with Regnery Publishing in Washington, D.C., he knew he had found a publisher that would match his faith in the project. “I will forever be in debt to Regnery and their fantastic team that helped make this book a reality,” Ruck says.

Ward Grant promised to round up support from other celebrities. Unfortunately, before they could get the ball rolling, Ward passed away three months later. Mr. Ruck then sought the help of Hollywood’s ex-official mayor Johnny Grant, who actually did as many USO shows as Bob Hope. With the help of Johnny Grant, the snowball effect took place and celebrity contributions which included essays from Oliver North, Buzz Aldrin, Dennis Miller, Paul Teutul, Sr., Fred Travalena, Ann Margret and Mickey Rooney started to happen.

Ruck also gathered quotations that honored veterans from sources ranging from Robert E. Lee and Thomas Jefferson to Maya Angelou and John Wayne. He collected excerpts from some of the most famous American military speeches in history, including Abraham Lincoln’s Gettysburg Address, Patton’s speech to the Third Army and George W. Bush’s speech on September 11, 2001.

Ruck went out of his way to find local photographers for each cemetery. His directions to the photographers were simple: be respectful and shoot more than just headstones. Ruck insisted on using images that had not been previously published because he wanted fresh, candid images for the book.

“All 47 of the photographers were volunteers and not professionals, each with their own story why they accepted the volunteer assignment. ” All I could offer them was the chance to get published and maybe a few free books,” Ruck said. They were fantastic and did an unbelievable job. I can’t believe the shots they captured. Over 6,000 photographs were taken and 200 are in the book.

After much research into non-profit organizations for veterans, Ruck was honored to choose the Freedom Alliance Scholarship Fund, which gives college scholarships to the children of service members who were killed in action or have a 100% disabled rating from the Department of Veterans Affairs.

Sacred Ground was awarded with a Gold Medal from the Military Writers Society of America in non-fiction for 2009. It was named the Overall Grand Prize winner at the Branson Stars & Flags Book Awards, which is part of America’s largest veteran celebration, The Branson week-long Celebration of Veterans, and as the Winner in the 2009 USA Best Book Awards in the Military History category.

Acting Secretary of Veteran’s Affairs Gordon H. Mansfield presented Ruck with a Special Commendation Award in Washington, DC. Tom Ruck has brought honor and recognition to America’s heroes and the VA, said Mansfield. His respect and admiration for the service and sacrifices of our veterans and their families is reflected on every page of this book. Sacred Ground has heightened the public’s awareness of the courage, commitment and sacrifices of America’s Veterans.

“(The foundation) makes sure we don’t forget the children: that we say thank you for the service of their mom or dad,” Ruck says. “If you’ve lost your life or are severely disabled in service to this country, it’s the least this country can do.” “If it’s going to sell more books for the kids, if it’s going to heighten the awareness and dedication of our veterans and our troops, and let the country know we have 131 beautiful, gorgeous, serene, dignified cemeteries all around the country, then that’s what it’s all about, the kids deserve it. They deserve my effort to go out and do more with the book. And we’re doing it,” Ruck says.

Sacred Ground was published on Veterans Day in 2007 and sold well. Ruck took a hiatus from promoting the book in 2008 after his wife’s death in January, changing jobs in the middle of the year, moving to Rancho Cucamonga, California and suffering a heart attack in December.

In 2009, Ruck returned to book promotions with renewed vigor, accepting invitations to fly all over the country, giving speeches at ceremonies honoring veterans. He is the featured speaker at Ft. Logan National Cemetery in Denver this Memorial Day, 2011.

Ruck’s selfless giving to veterans and children of veterans will continue through several major projects that are in the works. He’s also in the ‘plans and negotiations’ stage of a fund-raising TV special that will feature the choirs of all four military academies singing on stage together for the first time in history.

Ruck is also preparing to begin a Sacred Ground companion book that will focus on U.S. national cemeteries in Europe.

Alongside the photographs of cemeteries, Ruck would like to tell the stories of the towns where the cemeteries are located, many of which still show gratitude for the American service members buried there. Ruck describes a town in Belgium where the school children still learn the “Star Spangled Banner” in English and sing it each year at the American cemetery. He also hopes to share stories of entire ships, airplanes and military units that have perished in battle. 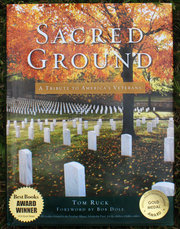 Sacred Ground
From the back cover

“Their story is known to all of you. It is the story of the American man-at-arms…. I regarded him then as I regard him now–as one of the world’s noblest figures….His name and fame are the birthright of every American citizen. In his youth and strength, his love and loyalty, he gave all that mortality can give.” -General Douglas MacArthur

“All too often we take our freedom for granted. At times we forget that extraordinary men and women have sacrificed so much so that all of us may enjoy the freedoms we have. To all those who gave of themselves to preserve our way of life, the American way of life, I say: thank you.” -Col. Buzz Aldrin

“We mourn their loss and then entrust these selfless Americans to our national cemeteries where they rest beneath a white marble stone. Visit them, but tread lightly near each hero’s grave. Pray for them and their families, but do so quietly, for during their lives they had to endure the horrific sounds of war. And be grateful that here, in honored respite, these fallen champions can embrace what every warrior hopes for–a peaceful silence.” -Lt. Col. Oliver North

Get your copy of Sacred Ground at Amazon .
Website: http://www.sacredgroundbook.com