We are excited to welcome 20-year military-veteran-turned-author Tom Johnson to the Highlighted Author. He has over 80 books, magazines, and short stories in print to include Pangaea: Eden’s Planet. Get ready to enter a time warp in this sci-fi adventure and explore a world 60 million years before the dinosaurs! Hope you enjoy the feature. 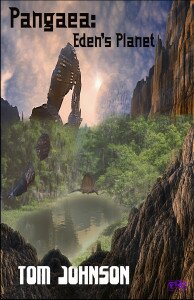 Seven astronauts en route to Mars encounter a time warp in space that disables their ship. Crash landing on Earth, they discover an alien planet sixty million years before the dinosaurs. Pangaea, the super continent, is filled with danger and terror, and they must survive against fierce reptiles that ruled the Earth 250 million years in the past!

Order your copy now on AMAZON.

“God – God? Enough about your God, Manning!” Colonel Peterson ordered. “What God would strand us here, in a primitive land, away from civilization? Wreck our ship, and injure our friends?

“I don’t want to hear any more about this so-called God of yours! And get rid of that stupid sign before anyone else sees it!”

“Let’s get some fresh air, Evelyn,” Major Cooper suggested, taking the colonel by the arm and leading her gently from the bio-dome. Looking back over his shoulder, he winked at Roger Manning and Sheri Thompson.

Once they were outside, the colonel regained her composure as she took several deep breaths. Looking at her second-in-command, she smiled briefly and asked,” Did I lose it back there, Major?”

“Just a tad,” he grinned. “But nothing damaged, I don’t believe. Let Manning have his Garden of Eden – and his God, if he wants them, Colonel. Maybe it will help keep him sane. I think that we’ll each need our special little distractions before it’s all over with.”

“Before what’s all over, Major?” she asked. “Before we’re all dead?”

“A slip of the tongue, Colonel,” he shrugged. “But, perhaps a Fraudulent slip at that!” he admitted.

“We are lost in a prehistoric land, with no chance of ever returning to our homes, and we’re likely to die a horrible death if we aren’t careful. But if we keep our heads about us, and watch our step, we just might grow into old colonels and majors in time. The sooner we face those truths, the better we will be able to deal with the situation, and accept our fate.”

“In other words, there’s nothing we can do about it,” she said, staring into his eyes.

The moment was broken, and they turned and rushed for the ship, fearing the worst. 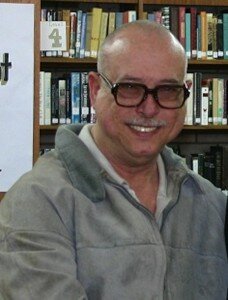 I was a voracious reader from childhood beginning with the Golden Age comic books to classic literature by the time I was ten years old. Exciting adventure stories kept me entertained until I discovered science fiction and hardboiled detective mysteries as a teenager. By my early twenties, I discovered The Shadow and Doc Savage pulp reprints in paperbacks, and was hooked on the fast-paced action novel. This led to collecting and research, which eventually interested me in writing by the time I was thirty. Today, I still love an exciting action novel over movies and television. I have over 80 books in print, including novels, anthologies, and short stories; plus I have written Introductions in many books for publishers. My wife Ginger and I have received numerous awards in the field for our work in keeping the old stories in the spotlight for new readers seeking escape in a thrilling adventure novels of the 19th and 20th Centuries. A 20-year military veteran, and non-commissioned officer, after retirement my wife and I started the FADING SHADOWS imprint, publishing a hobby magazine and several genre magazines for the next 22 years. I took college courses while in the Army, and actually graduated from The Institute of Applied Science in Chicago. The Institute is now defunct, I believe. Biology and math are my favorite subjects, and I have always wanted to be an entomologist or paleontologist, but never obtained a degree to either. Now retired, I devote my time to reading and reviewing books from numerous publishers. I still enjoy creating characters and plots, and writing novels and short story collections.

Connect with Tom and his wife Ginger: